NEWS: Senator Melaye escaped death by the whiskers as gunmen invaded his house

Senator Melaye escaped death by the whiskers as gunmen invaded his house in the early hours of Saturday at Ayetoro-Gbede in Kogi State. NAN gathered that the gunmen numbering about 10 arrived the house at about midnight through the bush and opened fire on the house from different directions.

The house was pumped with bullets while two of the cars parked in the estate were damaged by the gunmen. Melaye repping APC Kogi West, was in his country home at Ayetoro-Gbede in Ijumu Local Government Area for the Easter holiday at the time of the attack

The Police PRO in the state, ASP. William Aya, told NAN that the police received a distress call from the senator at about 1 a.m. and immediately responded.

He said the shooters escaped before the police arrived, thereby making arrest impossible. On his part, Sen Melaye said the shooters arrived at about midnight and started shooting sporadically at the main building in the compound.

He said the shooting lasted for almost one hour, adding that apart from the building riddled with bullets, two of his vehicles were damaged.

Senator Dino said he suspect’s Mr. Taufiq Isa, the current Administrator of Ijumu Local Government, as being behind the attack.

Dino said the attack was likely because of his verbal attacks on certain things in the state.

“I got a rousing welcome from Kabba to my hometown on Friday and I know it angered the power that is in the state, which mobilised for this assassination attempt on my life. 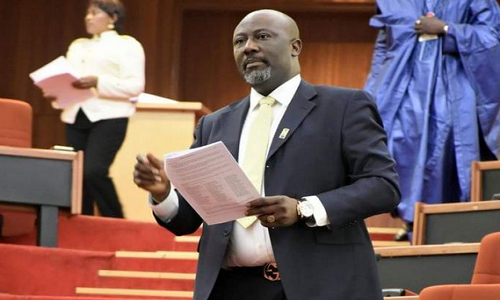 At about midnight, we started hearing gunshots. They shot more than 200 rounds of bullets into the house. This attempt to kill me will not stop me from speaking the truth. If I speak the truth, I will die, if I lie, I will die. I’ve decided to speak the truth and die. I’m not afraid of death. I only respect men, I don’t fear them.I am championing an administrative cause. I will continue to speak and be the voice to the voiceless. I’m not deterred; I remain resolute to make Kogi better. Noting will stop me from coming home.”

Melaye also got pissed at the police for not responding quickly to his call, saying that the house of the Divisional Police Officer in the town was very close to the scene of the shooting.

“The DPO did not come to my house until three hours later. Even the area Commander in Kabba was not notified until I called the Commissioner of Police.

I suspect a satanic collaboration between Taufiq Isa and the police in Aiyetoro because the duo held a meeting two days ago.

Only God will protect us in this country, but definitely not the police,” he said.

In a swift reaction, Mr. Taufiq Isa denied having a hand in the attempt on the life of Senator Dino Melaye, saying that he been busy taking care of his sick wife.

“I’ve never been a violent man. My running battle with Senator Dino Melaye, if any, is because I have asked him to stop vilifying the state governor, Yahaya Bello.

Let him (Dino) prove it. I lost my uncle a week ago; I’m still attending to my sick wife and busy supervising the APC re- registration programmes. I’m a democrat and law-abiding. I challenge Dino to prove his case,” he said. (NAN)